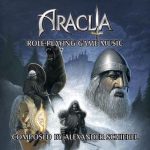 The Araclia Role-playing Game Music was composed in 2006 to provide symphonic background music for the German pen&paper role-playing game Araclia produced by AceOfDice. Each track conveys a particular kind of mood and some tracks are even designed so they can be played in a loop. The challenge was to not have the music interfere with the game master’s narration. Additionally I tried to include some recurring elements, themes and motives, so that the music also be enjoyable for itself and inspiring aside of the gaming table.

There are a few interesting things happening throughout the album. For the first time ever I introduced my own voice in one of my works, whispering ritual words to the music in the track Ritual. This track and Archaic are also cluster-based, which is something that I hadn’t done before. I’d like to think of the Araclia Role-playing Game Music as a major step in my musical evolution.

NEW! Araclia has recently been released on global music services!
Check it out on your favorite platform: