Today we get some Oscar music and Batman’s theme for the first time in this score. Listen, read along and enjoy!

It all starts with Oscar/Golden Globes-source music. I wrote such music for the first time and figured the main elements that I should use are syncopes, a melody for trumpets and strings and an emphasis on the brass section, along with a drumset and tambourine and a piano shining through.

When the robbery starts, the music switches abruptly into chaos mode. There are a lot of fast staccatos, wild harp arpeggios and toms underneath it all. The only instrument to penetrate the chaotic figures of the orchestra is the muted trumpets. btw: The staccato figures are to reflect the machine gun fire.

When Batman for the first time reveals himself in a superhero-like fashion, the Batman motif is played for the first time on horns, trombones and trumpets with a lot of punch added by bass drum and piatti. I especially like the echo-like character of the theme. It’s

wherein part 2 echoes part 1 and part 3 echoes part 2. The funny thing is: I had written the Batman theme many months before I decided to compose this score, and I’d never been happy with it, until I saw this scene and suddenly knew how it had to be shaped to get the most out of Batman’s appearance.

After that, the music returns to chaos mode – this time with the Batman motif in the bass line – while Batman fights the villains and bullets are still being fired in all directions. 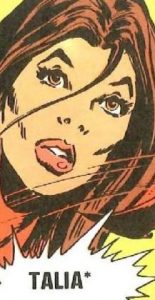 Then we have a dramatic pause at 1:20 and a building tension at 1:30 which is one of my favorite moments where the music tells you “something important is going to happen”. It does at 1:40 when Talia reveals herself as the leader of the group. Since she and Batman have a history, there is a dramatic (tam tam!) orchestral statement of her theme – something that is not considered contemporary any more I guess, but here in this 1970’s released plot, it all fits quite nicely. 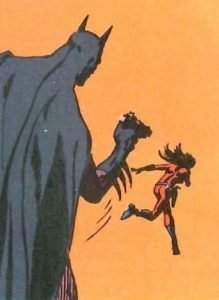 Talia’s theme starts on low strings (mainly cellos) with a alot of tremolo in the background and leads into a big tutti crescendo with a melody that goes up as well, both increasing the tension in this scene which is the key scene of the whole plot: Batman shooting her in the back while she escapes.

Talia’s theme is not heard too often throughout the score because for the rest of the story Batman and the reader believe her to be dead. There is, however, Ra’s al Ghul who plays a bigger role, and his theme and Talia’s are related to each other. They are not too similar, but if you compare them, the range, the up-and-down of the melody and also its starting point (the dominant), you’ll see how I derived one from the other.

I hope this analysis was interesting for you. Leave your questions and comments here or on Twitter!

Next time: Guilty As Charged.