This time we meet an old friend of the Batman who got his own theme. Listen, read along and enjoy!

Music for dialogue is harder to write than you might think, at least if you as a composer aim for something that is worth listening to, something beyond what I call wallpaper music. I tried to make the dialogue scene as interesting as possible by incorporating the Batman motif in the bass line and having some percussive, echoing instruments as a driving element while Alfred explains to Bruce Wayne the results of the forensic analysis. By the way, we have the crime investigation synthesizer used here again.

We then see Jack Ryder in the small telly by the window and then the scene crossfades to him in his studio, finishing off tonight’s news episode. For this transition I wrote news bumper music, blurring the lines somewhat between source music and underscore. 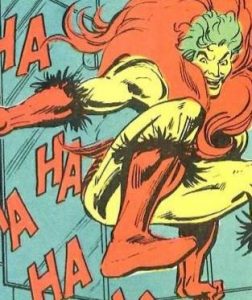 After that the soundtrack shifts to a build-up as Jack Ryder leaves the studio and transforms into his alter ego, the Creeper. For the Creeper I came up with two elements, one short motif which is actually what we hear during his transformation, three tritone chords on top of each other with echoing piano. I had a vision of late 60’s/early 70’s crime movies in my mind and modulated this motif to fit this period. (The second element which is more melodic and kind of a theme will be introduced in the next track.)

As the focus of the reader/the audience lingers on the Creeper for a little more than a moment, I bring in exotic instruments and effects, drums and flute to enhance his weirdness and savageness.

Next: Confrontation At The Zoo