This track ushers in the final part of the story. Prepare for circus sensation music, while you read along and listen!

We start with the introductory picture of the last chapter of the story which already hints at a circus being the place where everything will come together. The music starts in a gonzo/sensational way to keep up the momentum and then soon goes into 3/4 meter to reflect the circus.

The 3/4 meter stays with us as we hear a soft rendition of the Creeper Theme while Bruce Wayne and Jack Ryder are meeting (in spy-like fashion) on the streets exchanging intel. I could have gone into spy-thriller-music here, but I didn’t because I wanted some musical continuity throughout the piece and didn’t want to over-score the action. In fact, the story breathes, and this is a scene where all can relax a bit. The music changes soon enough to dissonance as the story puts emphasis on the somewhat terrifying laugh of the Creeper – not too much, just enough to end the cue with some drama.

Now the action takes place at the circus and the music follows there without compromise. We have 3/4 meter and clarinets and flutes going up and down like you would expect from carousel music.

As Batman (in disguise) watches the four main attractions, the music highlights them like a spotlight. Each one is introduced by a set of brass chords followed by tremolo strings and some accompanying instrument to reflect them properly. 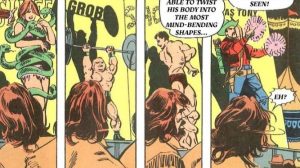 The pitch goes up from one to the next, as the tension rises, culminating in Slapleather Smith’s shooting coins with his gun and reminding the disguised Batman of the extraordinary skills that the unknown assassin had shown at the end of chapter 3.

Next: Searching the Wagon