I can’t imagine how burdensome it must have been for composers in the 20th century to estimate and calculate timing and tempo and then conduct the orchestra in a way that hits all the sync points right. Fortunately my digital audio workstation (DAW) does it all for me. Well, not everything – there’s still a few things to do, and they are best tackled with in the beginning. Before I compose a single note, that’s what I have to do:

First, I identify beginning and end of music and more sync points relevant to the particular scene. I insert markers at every sync point and make sure all markers are on the exact frame. That usually requires some zooming-in, but it’s not a difficult thing to do. Note that not every marker has to be frame-exact. Some sync points merely are changes in mood or tonality, others are reminders that some music element is required (perhaps a leitmotif). There are a few best practices that I use when hitting sync points:

Second, I tweak my tempo track so that the first sync point (which is the beginning of the music), falls in place with the first beat of a measure. At that point I insert a new tempo which is the tempo that the music should have. Even if I don’t know what exactly the music will be like, I can already tap the tempo. You can see some of this in the screenshot taken from my Ladyhawke alternate score project. 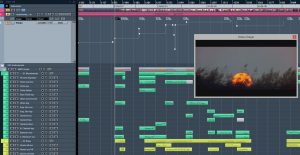 So, what I do now is I move the cursor to the next sync point and leave it there as I adjust the tempo of the previous sync point, going a bit up or down until the cursor and the new sync point aligns with a beat or even with the beginning of a measure. Depending on whether that sync point has to be met frame-exact, adjusting the tempo can be tedious.

That’s usually as far as I go tempo/timing-wise. I wouldn’t configure all the sync points in advance, because if something didn’t work out as planned, for instance the tempo being too slow or too fast, I’d have to re-adjust all of them. Then composing starts, and as the musical idea develops I might have to apply this process for the other sync points as well.