After lots of drama, Batman is up for a fight. Let’s get into Goldsmith-mode, shall we? Listen and read along! 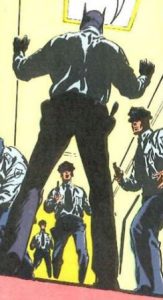 The music starts with the prison guards approaching. Very quickly Batman finds himself in the middle of a fight for which the music is written in 7/8 meter. Here, for the first time in The Dark Guardian, I fall into my “unmasked Goldsmith-mode”. Jerry Goldsmith is probably my biggest influence and his action writing has shaped my taste for music profoundly. I make no attempt at denying this here.

The Batman motif lies under it all in the bass, and I’m eventually going very percussive in the style of Lolita Ritmanis et al. who composed wonderful “light” action music for the Batman Brave and the Bold series. I chose this approach because Batman and the guards don’t really want to hurt one another, so it’s not a fight for life and death. 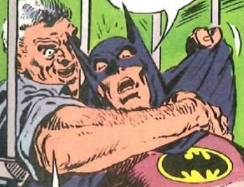 music oscillates between lighter and darker moments to reflect certain micro-aspects of the action. For example does it get darker with low brass and timpani as Batman is temporarily grabbed by one of the prisoners who gets a hold on him when he’s near the cell bars.

It all turns to musical mayhem with chromatically descending triads as Batman is put down by the sheer number of guards. There’s a notion of not being able to breathe in this musical figure – literally for the woodwind players – but also for Batman who gets buried under all the guards that throw themselves on top of him. 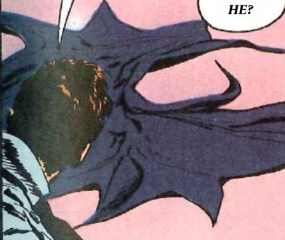 But when the music reaches the final note, Batman is not there!

Next time we get to see where he’s gone: Escape.