Let’s investigate with some detective/investigation music that follows quite a lot of different events. Listen to the music and read my commentary!

The music starts slowly with some low piano and rhythmic elements as Batman (still in disguise) sneaks into Slapleather Smith’s wagon, searching for evidence. This is something that I love about this Batman story. The Batman is still a detective, looking for clues and solving crimes, not just a haunted figure wreaking havoc among underworld figures. 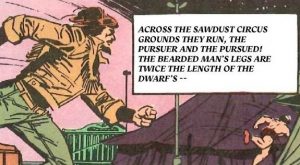 Speaking of underworld figures – Batman is spotted by the dwarf and rushes after him before he can alarm the whole circus. As that happens the music gets faster. I wrote some quick figures on the clarinet which runs up and down and up again until Batman finds himself in front of a mirror maze.

Here the music pauses for a moment (as does Batman). Some piano chords which, I admit, are borrowed from Bill Conti’s For Your Eyes Only score, are the transition to the mirror maze in which Batman eventually gets the feeling he is no longer the hunter but the hunted. The music continues a tempo, still incorporating woodwind runs. 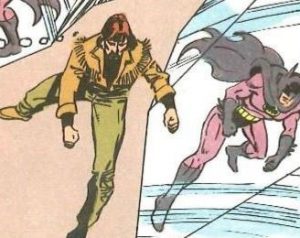 As Batman sees his (real) image in the mirrors the music leads to the Batman motif and then into “panic mode” with lots of staccato brass and percussion hits, before the thugs arrive and we have another fight scene.

The music picks up combat music ideas that have already been introduced earlier in the music like 7/8 beat, shakers and brass staccato, accentuating the short, but relieving fight, after which Batman discovers a way out of the maze.

I can tell you, this track didn’t come very easy. There are a lot of very different events and actions, emotions and locations to bind together, and I tried to make the music as cohesive as possible. There’s only so much you can do with a theme or a motif, and in this case I had to work very hard on the transitions from one cue to another. Please leave a comment and let me know if I succeeded in this task, either here or on Twitter!

I hope you enjoyed the music and my background info. Next time we meet the dwarf again in Pursuing the Dwarf!