Batman searching the circus area for clues is musically challenging for any composer. Read why and listen to the music!

The circus at night is treacherously calm and the slow variation on the Batman motif reflects this as Batman continues his search for clues. The monophonic part of the music is interrupted as the dwarf appears again.

Batman chases him across the circus area accompanied by fast string and woodwind writing until he and the music come to a sudden stop, as Batman realizes that the dwarf is gone again. The timpani pairs with low piano to create a feeling of uneasiness, foreshadowing the danger that Batman is about to face. 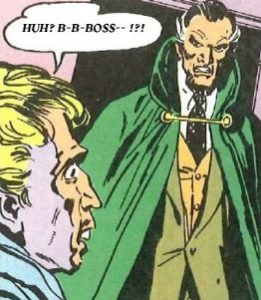 Then Batman spots two thugs playing cards. He watches them silently – the music is restrained to chimes and high strings – until Ras’al Ghul enters. The music underlines his strong presence with Tam Tam, but I had no time to use his motif here, at least not the melody. Instead I have the timpani play 5 notes in succession which is the rhythmic component of Ras’ motif. The melody isn’t used before he reprimands his thugs and beats them down. You can hear it in the woodwinds which are contrasted with brutal staccato in the low brass. 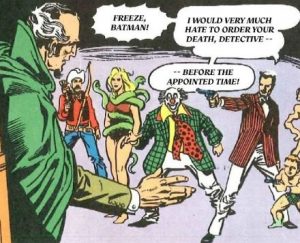 After that the music doesn’t stay in this mood very long, as things change very fast: Ra’s al Ghul is actually Batman in disguise, but his identity is uncovered by the circus people and the circus director. They all gather around him, telling him to surrender. Throughout this the music tries to maintain tension, building slightly to the point

where Batman jumps at the circus director, but underestimates the clown who, with a swift stroke, knocks him out. 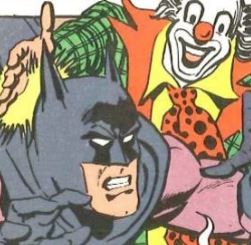 The music for Batman attacking the director is to reflect his panic and the quickly changing chain of events. The music leads to the sudden blackness which Batman falls into after being knocked-out. For the knock-out the music ends at three subsequential chords (piano and brass, inspired by Goldsmith’s Capricorn One End Title, listen at 0:28 if you’re interested to compare) which mimmick the 3-note Batman motif, but they also kind of fade into each other, creating a blur and a feeling of “what the hell has just happened?” which is essentially what Batman experiences the second before everything fades to black.

Next time: the Finale Grande!