This track features the Batman Theme in more than 3 variations. Can you hear them?

The track starts with some light jazz accompanying the talk between Commissioner Gordon and Bruce Wayne. The melody on the saxophone is a variation on the Batman Theme.

The music then leads into a more recognizable citation of the Batman Theme on low strings and again we hear the “crime-synthesizer” that was introduced in Track 01. 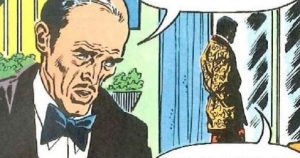 After that the orchestra pauses for a moment and gives way for a solo clarinet to represent Alfred’s and Bruce’s worries about the situation. Following Bruce’s memories about the murder and the dialogues which include a phonecall by Dick Grayson (a.k.a. Robin) the music keeps a fundamental tension, not too much, and uses the Batman Theme to prepare for the scene that is to follow. 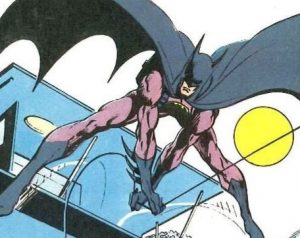 After Bruce hangs up, timpani hits and low piano in unison signal us that a new scene has just started. Bruce briefly informs Alfred that he is to “see a man about a murder” and, dressed as Batman, leaves the Wayne Tower. As he floats over the roofs of Gotham, we hear the first really satisfying rendition of the Batman Theme (despite being a variation which builds up melodically faster than the others), substantially driven by a bass drum pulse. I added a solo violin here to accompany the string figures in the background to make the whole arrangement more delicate and Elfman-esque.

The bass drum pulse keeps going even after the scenery is gone and Batman breaks into the city prison. As he climbs the walls, the music goes up, too, and even the tempo increases which adds to a nice effect. On the rooftop, Batman is almost caught by the prison spotlights, a danger musically reflected by brass hits that kind of echo away from trumpets to trombones as he of course elegantly avoids them and finds his way inside.

Next: Break-in At The Big House