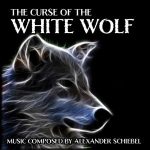 Back in 1995, I watched a performance of Anton Bruckner’s Symphony #5 and I was so impressed that I wanted to compose something with equal gravitas and symphonic continuity. As a program for the music I would use a fantasy story that I had previously written myself. The story was set in the northern lands of a fantasy realm and it was about a curse and a wolf and a young female mage trying to break a spell. (If you’re interested, the story is told in the Music-to-Picture video on my YouTube channel).

The music was composed within 21 days. Still I can’t believe how I did it. I remember I was very focused, keeping to key elements and themes, trying not to stray too far from the musical core. The themes I first developed on piano, then tried some things with the orchestration, for example the “barking flutes”, and then I finished the key scene first (The Gathering of the Wolves). I still consider it as one of my best cues.

The original White Wolf was produced with a KORG 01W synthesizer with a built-in 16-track sequencer. I had no PC or Atari ST (or whatever serious musicians used back then), so it all came into shape by recording one instrument track after another into that box. Last year I decided to give the White Wolf the symphonic sound it really deserved by re-arranging the whole suite for use of Vienna Symphonic Library samples. During the process I was surprised about the quality of the original MIDI files; apart from transposing and a little quantizing, many parts could be used as they were. Of course I changed a few things and added a few seconds of new original music to one of the shorter tracks (can you guess which one?), though I tried not to alter the character and mood of the 1995 version.

The entire “White Wolf symphony” is available for download and listening here.

If you’re interested in hearing the difference between the original and the new version, I uploaded this particular track for comparison: